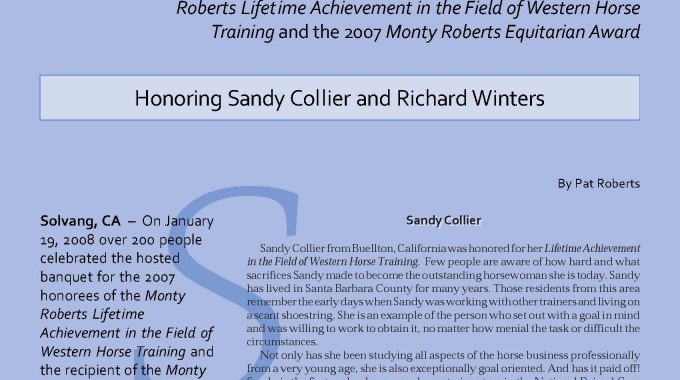 Solvang, CA – On January 19, 2008 over 200 people celebrated the hosted banquet for the 2007 honorees of the Monty Roberts Lifetime Achievement in the Field of Western Horse Training and the recipient of the Monty Roberts Equitarian Award dedicated to that person who has worked with the horse’s mind without using force. This event is held annually on Flag Is Up Farms at the home of Pat and Monty Roberts, who sponsor the awards and the evening for the recipients, their family, friends and colleagues.

Sandy Collier from Buellton, California was honored for her Lifetime Achievement in the Field of Western Horse Training. Few people are aware of how hard and what sacrifices Sandy made to become the outstanding horsewoman she is today. Sandy has lived in Santa Barbara County for many years. Those residents from this area remember the early days when Sandy was working with other trainers and living on a scant shoestring. She is an example of the person who set out with a goal in mind and was willing to work to obtain it, no matter how menial the task or difficult the circumstances.

Not only has she been studying all aspects of the horse business professionally from a very young age, she is also exceptionally goal oriented. And has it paid off! Sandy is the first and only woman horse trainer to win the National Reined Cow Horse Association World Champion Snaffle Bit Futurity. This is one of the greatest competitions for cow horses known for its prestige throughout the world. She has also won the NRCHA World Championship Reserve Co-Championship, in addition to being a regular finalist at the competition annually. She has won a NRCHA Stallion Stakes Championship and has been the NRCHA Limited Open Champion.

She is ranked in the top 10 for NRCHA earnings and has been consistently ranked among the years’ top five reined cow horse all-ages, all-divisions rider. Sandy has also competed at the American Quarter Horse Association’s World Championship in Oklahoma City where she won the Junior Working Cow Horse Open Division. These are just a few of her achievements in the Western Field.

In addition to the reined cow horse division competitions, Sandy has been a regular finalist in the cutting horse futurities when she showed cutters for many years. Along with training horses, Sandy holds hands-on training clinics. She has developed and produced several training videos, and she is in the process of writing a book that will be as successful as all her other endeavors. She is an accomplished speaker and attributes much of her success to integrity and a positive mental attitude. She adds that ‘being a perfectionist has been helpful.’ This has been substantiated by many of her loyal and long-term friends and customers.